What to eat in Corfu? A culinary journey into the Corfiot cuisine 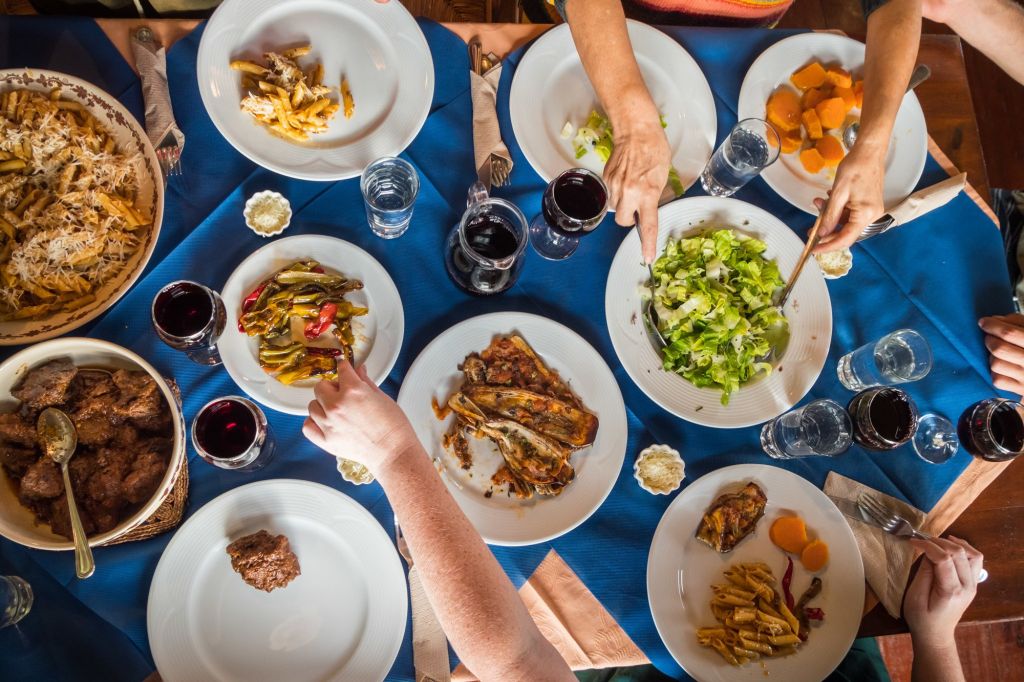 Corfu may be a Greek island, but it has its own local cuisine with dishes that cannot be found anywhere else in Greece. Corfu’s gastronomy tradition is unique because it has been influenced by a variety of cultures such as the British, the French and the Italians. They all have left their mark on the island’s culinary evolution and Corfu’s food is therefore truly multicultural!

Generally speaking, Corfu dishes are Mediterranean based on the same ingredients as the Italian cuisine but they are much spicier, they contain more calories, and are cooked with lots of spices and herbs such as oregano, garlic, onion, parsley, basil, dill, peppermint, and spearmint.

Fresh, locally grown ingredients and home-grown olive oil are key to Corfiot cuisine. Hearty dishes of lamb and game, fresh seafood, and made-for-sharing meze plates are what you’ll find on many Corfiot dining tables, typically partnered with glasses of wine from nearby vineyards. Besides local foods, you will also find traditional Greek cooking in the Corfu. The Corfu dining scene has restaurants that range from rustic tavernas to stylish modern venues – many with atmospheric ocean views and al fresco terraces.

Where ever you decide to eat, here are our favourite things to eat in Corfu that all the family will enjoy!

The first and most characteristic sweet is called tiganites tou Agiou, a pancake-like sweet, shaped in little balls that are eaten with honey and cinnamon. They are traditionally cooked on the 11th of December when the Patron Saint Of Corfu, Agios Spiridon, is celebrated.

Kids will love the Tzaletia (from Italian giallo = yellow), fried dough pancakes with sugar and cinnamon.

Sikomaida is a famous Corfiot cake from dried figs. This unique sweet is a combination of figs and wine must, flavored with aniseed, pepper and ouzo, wrapped in beautiful fig leaves. Traditionally, they are dried in the sun.

Don’t miss the kumquat, a citrus fruit originating from China that was brought to Europe and cultivated in Corfu’s excellent climate. It has so many uses that it has become a Corfiot trademark.

Most kumquat fruits end up as liqueur, but they are also used in cooking, especially in sweets such as marmalade and spoon sweets.

Pastitsada and other pasta dishes

All kids like pasta and in Corfu there is plenty of that! Pasta has been an integral part of the Corfu cuisine, at least since the Venetians ran the island. Corfu’s number one pasta dish is pastitsada, pasta with red sauce, spices and rooster or beef. You’ll find it on almost every traditional taverna menu as it is one of the most popular Corfiot dishes for locals and tourists alike.

Another famous food that is served with pasta is manestra kolopimpiri cooked with orzo, pepper and tomato sauce.

is a vegetable and pasta soup that everyone in the family will enjoy.

Sofrito is another Corfiot classic. This delicious dish comes from a Venetian recipe and is a traditional slow-cooked beef-based dish served with fries or spaghetti, sometimes with rice or with puree according to different tastes.

After the Pastissada and the Sofrito, the dish that everyone loves in Corfu is Fish Bianco. It’s essentially fish simmered with white wine on a bed of potatoes.

Parents will also love the aromatic Bourtheto fish stew of scorpion fish in a spicy sauce.

Cheese plays an important role in the Greek and Corfiot cuisine. Corfu is famous for its Kefalotyri cheese, a very old cheese in the historical sense. It is a hard cheese made of sheep’s milk with a bit of goat mixed in. It’s very salty and delicious in pies or just without anything else! Xynomyzithra is another favorite in Corfu. It has a dominant rich taste and goes great with fruit and honey.

One of the simplest farmer foods on Corfu are pies made with seasonal vegetables. Depending on the season you may find Zucchini pies, savoury pumpkin pies, onion pies, cheese pies, or whatever is fresh on the farm that day.