The Achilleion in Corfu, Greece 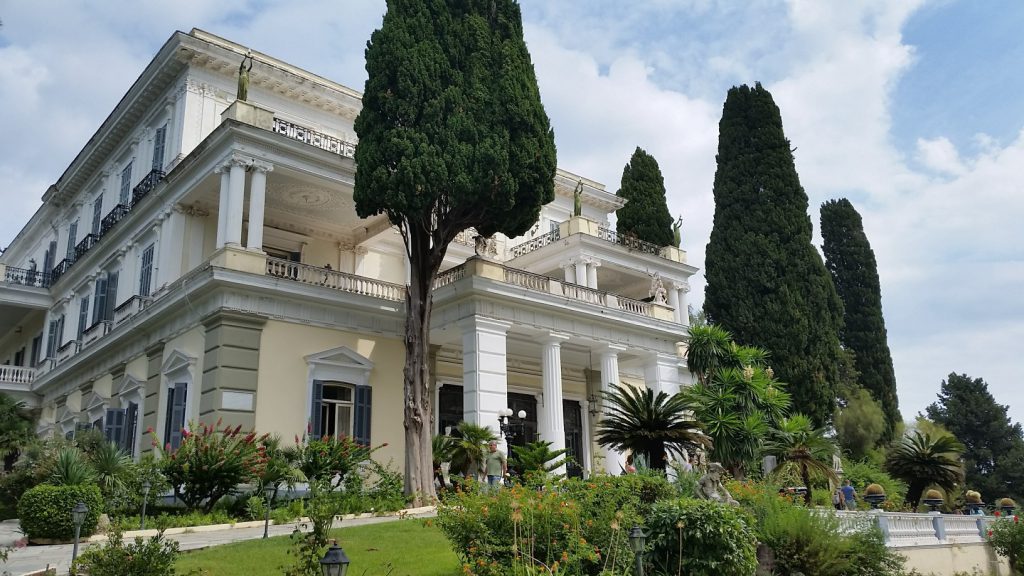 An Inspiring Day at The Achilleion in Corfu, Greece

I’m standing in a beautiful courtyard overlooking a panoramic view of flowering gardens, a green forested hillside and far below, the sparkling blue Ionian Sea. Surrounding me stand the Muses: all nine of them. I’m next Erato, the Muse of poetry. Beside her, Terpsichore holds her harp, and Melpomene smiles silently. This is the magnificent peristyle of the Achilleion in Corfu, once the home of Elisabeth, Empress of Austria and Queen of Hungary. The peristyle is dominated by the nine marble Muses together with states of Apollo and the three Graces.

SISI – QUEEN OF HUNGARY AND BOHEMIA 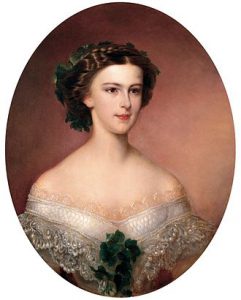 Elisabeth, known fondly as “Sisi” was the daughter of Duke Max of Bavaria and his wife, Ludovika. As a child, she was shy and not considered pretty, but she grew to be a vibrant, attractive young woman who shared a love of the ‘lower classes’ with her father and enjoyed long walks and horseback riding. At the age of sixteen, she became the wife of the Emperor Franz Joseph of Austria and was named Queen of Hungary and Bohemia.

Sisi and her children

However, Franz Joseph, it seems, was a ‘mama’s boy’ and clung to his mother. He put her in charge over the care of the couple’s two daughters, Sophie and Gisela. The two girls lived in a nursery near the grandmother’s apartments and attendants, chosen by their grandmother, raised them.

Sisi had little part in their upbringing and almost no contact with the little girls, but during a state visit to Hungary, she insisted that the children accompany her. Unfortunately, they became ill, and little Sophie died. Sisi’s mother-in-law used this misfortune as proof that the young Empress was unfit to be a mother. Sisi gave birth to Crown Prince Rudolf a year later, but he was also taken into to the care of his grandmother. A third daughter, Marie Valerie was born in 1868, and unlike with the first three children, Elisabeth insisted on raising Mari Valerie herself.

Her only son, Crown Prince Rudolf, was never close to her when he was growing up although he shared her liberal, anti-aristocracy, republican beliefs. He was a bright, delicate young man who feared military training. He’d had an even worse relationship with his father who had refused to allow him to attend university. Despondent and rejected, he and his 17-year-old mistress committed suicide in his hunting lodge. Elisabeth blamed herself because she had not shown him more support. From the time of his death, she wore mourning clothes for the rest of her life. 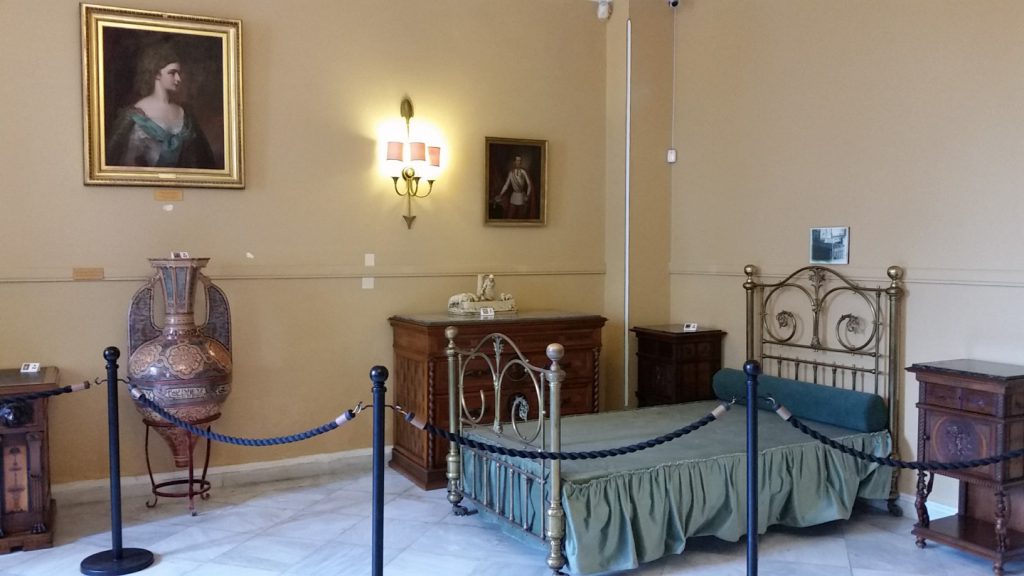 THE ACHILLEION IN CORFU, GREECE

After the wedding of her youngest daughter in 1890, Elisabeth started spending more time away from Vienna. Following a visit to Corfu, she decided that this was a perfect location for her to build a palace. The design was meant to represent an ancient Phaecian palace. It was designed by Italian architect Raffaele Caritto and built on a 200,000-square meter area that Elisabeth’s husband owned. Ernst Herter, a famous German sculptor, was commissioned to create works inspired by Greek mythology. His famous sculpture,Dying Achilles, forms the centerpiece of the Achilleion Gardens. She also had a cenotaph in memory of her son placed in the Achillean garden which she was able to see from the peristyle.

Courtyard of the Muses 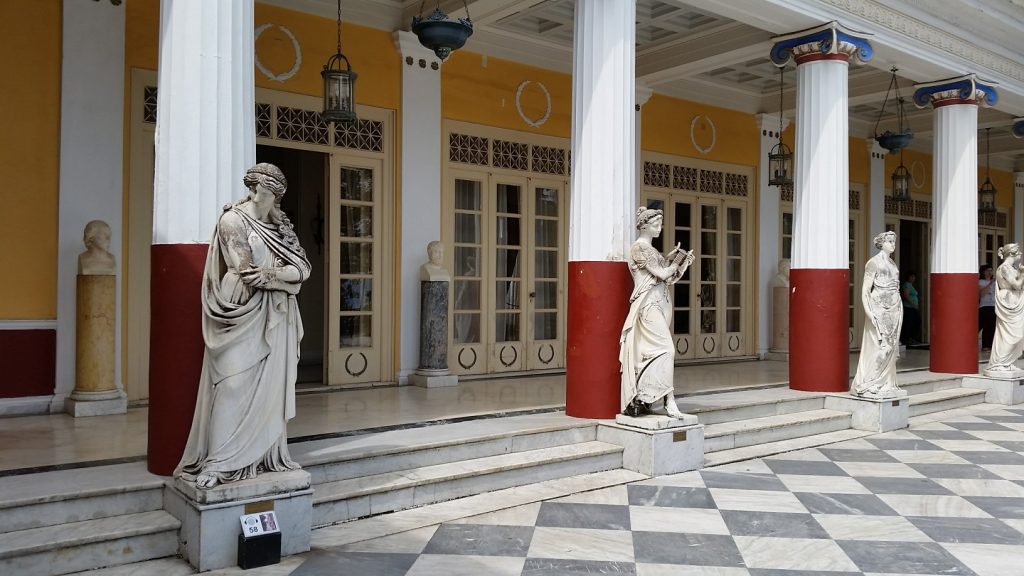 From the courtyard of the Muses, I walk down the marble steps into the lush garden. In front of me is the magnificent life-sized sculpture of the dying Achilles, his eyes gazing skyward as if supplicating help of from Olympus. Around me are flowering bushes and palm trees, the solitude broken by the chirping of birds. At the foot of the garden, there’s an imposing bronze statue of Achilles standing guard surrounded by palm trees. He’s wearing full hoplite armor and brandishing a sword. This statue was commissioned after the Achilleion passed to the ownership of Kaiser Wilhelm in 1907. He also placed a life-size statue of Elisabeth in the garden in her memory. 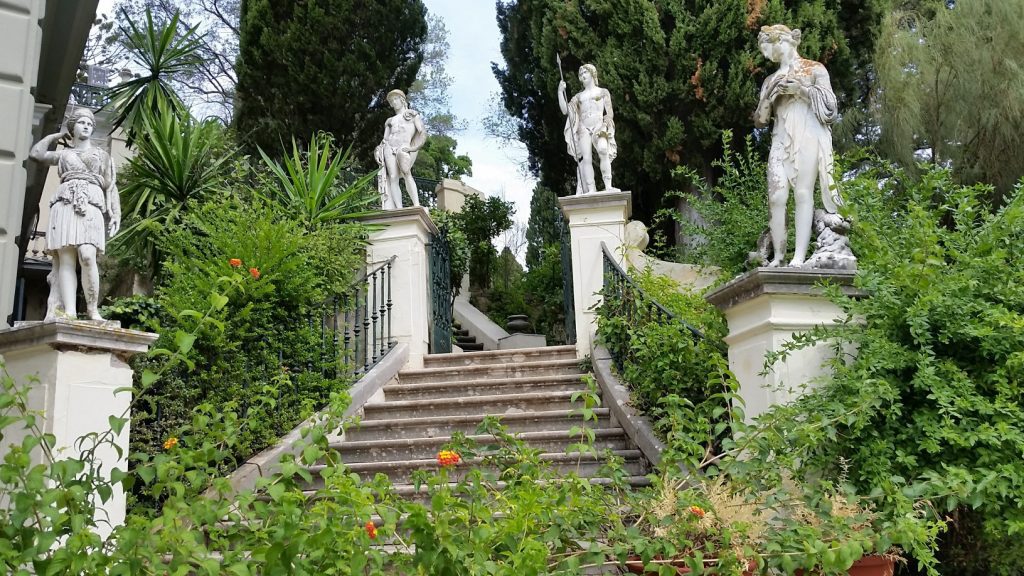 That morning I spent browsing the ornately decorated rooms of the palace. Empress Elisabeth loved Greece, its language, and culture. The legendary Achilles is the central theme of the Achilleion in Corfu. She admired the Troy hero and said: “I want a palace pillared with colonnades and hanging gardens, protected from prying glances – a palace worthy of Achilles who despised all mortals and did not fear even the gods.” 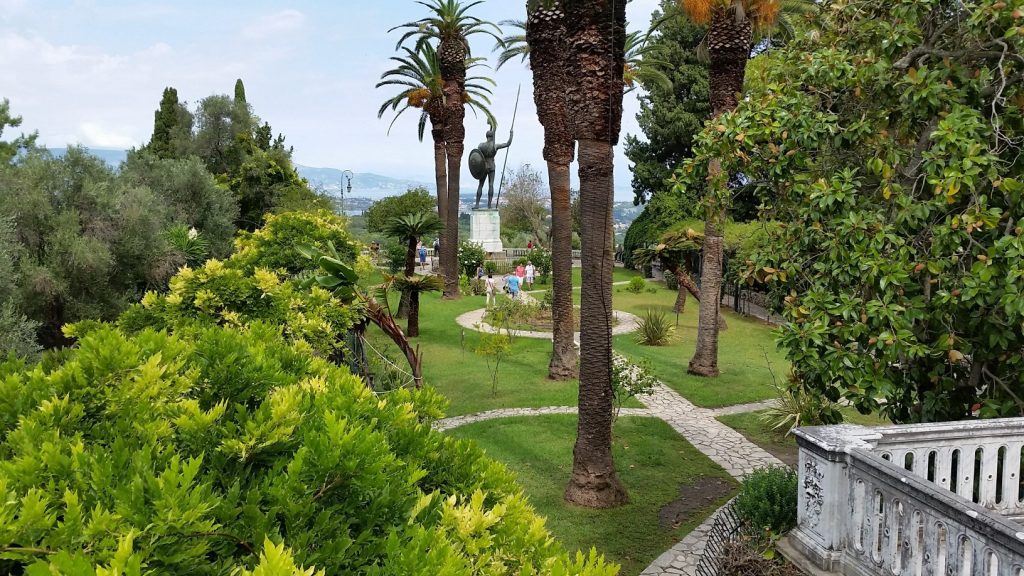 Achilles –  The Centerpiece of Achilleion

The Achilleion in Corfu abounds with Classic Greek statues and paintings honoring Achilles. As you enter, there is a staircase with statues of Zeus and Hera. On the right is a portrait of Empress Elisabeth was regarded as one of the most beautiful women in Europe. A beautiful fresco depicting the “Four Seasons” decorates the ceiling of the Main Hall. It is dominated by a famous painting “The Triumph of Achilles” by Franz von Matsch. In it, Achilles is seen dragging Hector’s lifeless body in front of the Gates of Troy. 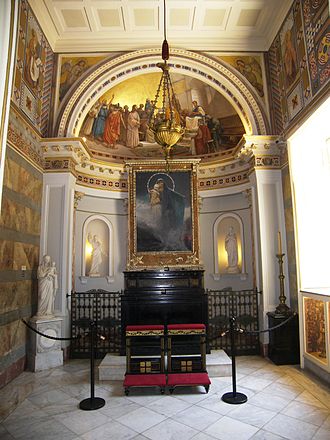 The Empress’s Catholic chapel is one of the most impressive rooms with its dome-shaped ceiling depicting the Trial of Jesus. In another room known as the “Arcade of the Wise Men,’ there are thirteen busts of ancient philosophers and one of Shakespeare.

I wandered into Elisabeth’s room that showcases memorabilia and paintings of the Empress and her husband together with records from her assassination. After the wedding of her third daughter, Maria Valerie, the Empress had started to travel, usually under an assumed name.

Tragically, during an overnight stay in Geneva, 1898, her presence in the city was announced in the newspaper. As she was walking from her hotel to her ship on which she was to leave for France, she was accosted by an Italian anarchist, Luigi Lucheni, who had come to Geneva with the intention of assassinating the Prince of Orleans.

When the Prince failed to arrive, Luchini chose her as his victim, in spite of knowing, nor caring that she shared his opinions on aristocracy. He stabbed her with a sharp file puncturing a tiny hole in her heart that went un-noticed until she later fainted from loss of blood. By then, it was too late for the doctors to save her life. Luchini was sentenced to life in prison but hanged himself in 1910.

After Elisabeth’s death, the Achilleion in Corfu stayed closed for nine years. Her daughter then sold it to the German Emperor Kaiser Wilhelm II.

As I stand in front of the marble statue of Achilles, dying of the mortal wound to his heel inflicted by Paris, I think of this brave, beautiful woman who had such a zest for life and a love of nature and art. A woman, who so tragically died by an assassin’s hand. The beauty she created here at the Achilleon inspired me, and I feel privileged to have been a ‘guest’ in her sanctuary with the Muses and her hero, Achilles. 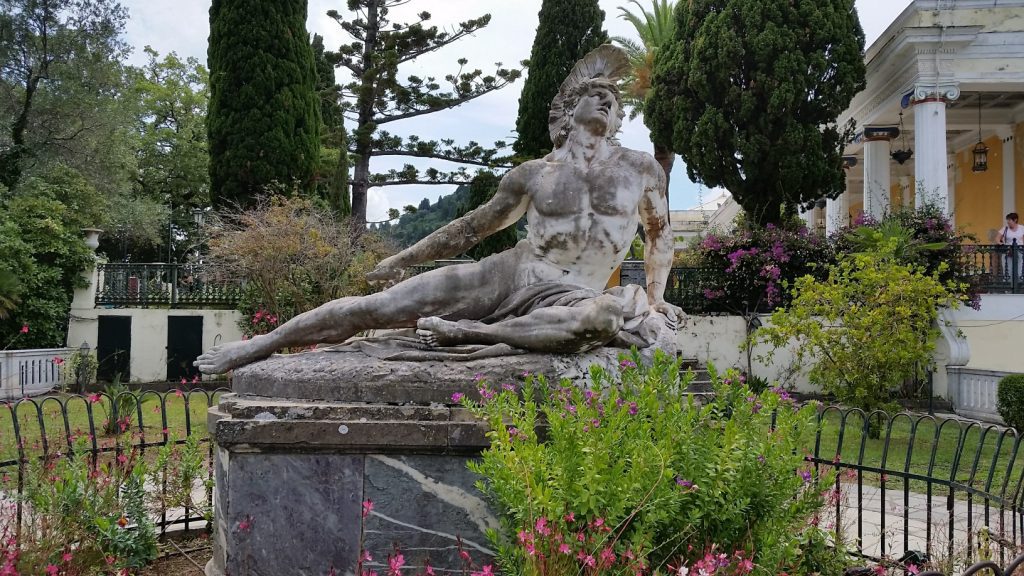 ABOUT THE ACHILLEION IN CORFU:

The palace became a center of European diplomacy until the outbreak of World War I. During the war, French and Serbian troops used it as a military hospital. After the war had ended, it came into the possession of the Greek State as part of the war reparations in 1919. From 1921 to 1924 the palace housed the Save the Children Fund orphanage. During the years 1941-1944, Italian and German occupation forces used the palace as a military headquarter, but returned it to the Greek State at the end of the war. In 1962 the Achilleion was leased out, and the upper floors were turned into a casino. The casino scene in the James Bond film

In 1962 the Achilleion was leased out, and the upper floors were turned into a casino. The casino scene in the James Bond film For Your Eyes Only was filmed at the Achilleion Palace. By 1983 the palace came under the management of the Greek Tourism Organisation and was restored to a museum and used for the European Union Summit. Ever since the Achilleion in Corfu has been used as a museum and a venue for various events.

Written by and photos by W. Ruth Kozak for EuropeUpClose.com